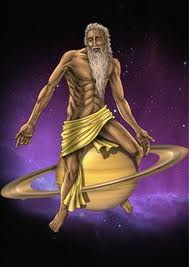 The planets of our solar system fall into 3 different categories. The first 3 planets - Mercury, Venus and Mars rule our day to day lives, the things that shift and change regularly. These are the planets that spend just a matter of weeks in each Sign and therefore in each area of your Chart, sometimes less than 3 weeks in Mercury's case, around 4 weeks for Venus and 6 weeks for Mars. So their influence, although significant at the time is transient and doesn't usually stay around long enough to create major change, unless they retrograde and stay longer, more powerful planets are also involved or unless you're at a point where you're so close to a tipping point, that they provide the right nudge at the right time.

The next group of planets, in their own special partnership, are Jupiter and Saturn. These two planets influence the direction our lives are taking at any given time and you couldn't get two planets that are more different. The final group are the three outer planets, often referred to as the 'new', 'modern' or 'generational' planets. The five inner planets - Mercury, Venus, Mars, Jupiter and Saturn can all be seen with the naked eye and before the invention of the telescope were the only planets visible. So these 5 planets are known as the 'old', the 'ancient' or the 'personal' planets. The 'new' or 'outer' planets - Uranus, Neptune and Pluto were only discovered in the 18th, 19th and 20th centuries, after the invention of the telescope and in so called modern times. Because these planets are so far out, their orbits are extremely long, sometimes spending decades in one Sign. Because of that their influence is more global, in that it's more about our connection to others and the outside world, than personal.

Saturn belongs in a group that is comprised of just him and Jupiter, so whether they like it or not, they have to co exist. Saturn takes 28 to 29 years to orbit the Sun and stays in each Sign and therefore in each area of our Chart from anywhere from 2 to 3 years. Where Jupiter expands, Saturn restricts. Where Jupiter wants you to move forward, Saturn wants you to hold back and where Jupiter represents hubris Saturn represents structure and discipline. Just as we need both night and day and both a brake and an accelerator in a car, so to do we need both Jupiter and Saturn.

Your natal Saturn is said to show where your challenges lie, but also where we get our strength, self control and moral compass from. It is where your natal Saturn is that we're most likely to find our blocks. As Saturn moves through the Signs he provides the opportunity to face challenges but also to tap into your personal power and because he knows your potential and what you are capable of, he pushes and challenges you, refusing to let you give up. Saturn is the planet that requires us to learn and grow and he does that by forcing us to take responsibility, to become accountable and to learn from facing consequences. Saturn pulls us back, urging us to take the time to do things properly and he won't let us take short cuts in the area of your Chart he's currently patrolling. It's by slowing you down that you get a chance to deal with things that once dealt with, become lessons we won't have to learn again, in other areas of our life.

Saturn also ensures that you don't sweep things under the carpet and where he is in your Chart, at any given time is where we are likely to be having difficulties or facing challenges, yet Saturn doesn't create problems, he simply draws attention to them, won't let you hide from them and uses them as an opportunity for you to grow and evolve, becoming wise and resilient in the process. If you use a Saturn transit wisely and can see that the tests and trials are all for a reason, then it is a chance to grow and overcome obstacles, in the process becoming stronger and empowered, so that you're free to move on. Saturn brings us our wake up calls, the kind that we can usually ignore or pretend they're not there, except when Saturn is involved.

Because Saturn is so tough on us, he's often given a hard wrap. Remember that feeling when you were a kid and you had to go to the dental nurse or to have your immunisations or worse still, had to eat your vegetables? They all seemed like cruel, unjust and awful punishments at the time, but there was just one end result in mind - our own benefit. Therefore Saturn represents the parental force in our lives. Saturn may seem gruff, unforgiving and a coldly unrelenting disciplinarian, but he is our protection against ourselves. We might bemoan the bank manager that won't increase our credit card limit, but can you imagine if he said yes to everything we asked? We'd be in debt up to our eyeballs! We need the safety fence around our lives that Saturn provides. So next time you come up against a brick wall or you keep repeating the same lessons over and over again, chances are Saturn's trying to tell you something. Through your Horoscopes I will let you know where Saturn is and what he's asking of you.