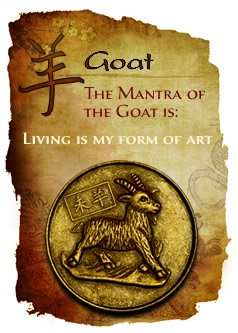 The Goat is also known as the Ram and also as the Sheep, which are interchangeable names for the same Animal and they all come from the Ram myth. Ancient records say that in early Autumn, in the very early days of humanity, the Heavenly Ram came down from the stars and onto Earth. When the Ram arrived he was pained to see the people were sad, depressed and were suffering from sickness and realised it was because the crops had failed. In Heaven the Ram had only been accustomed to rich fields of grain and couldn’t bear to see the people suffer.

It was the Jade Emperor himself who decreed that grain couldn’t be grown on Earth and only in Heaven, so the only option for the Ram was to sneak into the heavenly fields and steal some grain seeds, which he did. The Ram returned to Earth and not only gave the seeds to mankind, but taught them how to sow the seeds. On their very first attempt the seeds reaped a bumper crop and the people were eternally grateful to the Ram.

When the Emperor heard about this he wasn’t impressed and he flew into a rage. He raged at the Ram that if he felt so strongly about feeding the people then he could sacrifice himself and the people could eat him. The Ram was slain and his meat fed to humankind. But a year later, at the same time of year as the Ram first appeared he was reborn.

When the Emperor had called for nominations to compete in the race to select the 12 Animals to represent the 12 lunar years the people nominated the Ram, in appreciation for the sacrifices he made on their behalf.

If the Goat could he would take the whole world under his woolly arm and protect them, believing the best in everyone and is often a hopeless romantic. In the Goat we find a gentle, kind and considerate soul, caring for the plight of others and often deeply troubled if they’ve made a mistake, have done something wrong or made things harder for someone else. It’s their ability to put themselves into others’ shoes and to empathise with them that makes it hard for a Goat to live with any upset they may have unintentionally caused. If the Goat happens to do something to upset you, you’ll be smothered with apologies and attempts to ‘fix’ whatever they feel they’ve done. Of course a lot of effort goes into making sure they don’t get into that situation in the first place, so they’ve always got their antennas up, usually to make sure they get it right.

Goats are kind, loving and affectionate and because they have a strong moral compass and always do the ethical thing, they are usually held in high regard and are loved and trusted friends. However, this does make the Goat nervous and hesitant at times, anxious about stepping onto anyone else’s toes and always wanting to keep the peace.  However if a Goat feels that something is morally right, they won’t be averse to breaking the rules.

Yet don’t mistake this calm and gentle exterior as a sign of weakness, for they are incredibly brave and tenacious. A Goat isn’t afraid to go off on adventures, crossing the globe on their own and facing dangers head on. As long as they know it’s only themselves that are at risk there is nothing a Goat won’t try.

Goats love the life’s simple pleasures and comforts and security is important. The beauty of nature can leave them breathless with joy and the simple things in life bring a sense of bliss. Goats are dreamers, they’re creative and they love to nurture. While a Goat will happily set their own timetable, they prefer not to conform and therefore love their own independence, which is why they often veer towards professions where they can work for themselves, setting their own rules and answering to themselves. Goats make great writers and artists or anything in the creative fields.