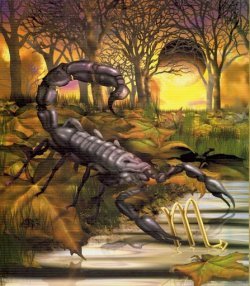 Everything about a Scorpio is mysterious and they do nothing to dispel the sense of mystery they evoke, in fact they enhance it, because they enjoy a sense of secrecy and drama. While Scorpios are mysterious and secretive by nature, that doesn’t mean that they are deceptive, it’s simply part of their nature to keep things hidden. They like it that way.

This comes from their place in the heavens. Scorpio is the darkest of all the constellations, buried deep in the darkest part of the Milky Way. It’s seen as a Scorpion emerging from a crack in the starry night sky, just as a scorpion, Scorpio’s symbol, lives within dark cracks and crevices.

You’re not going to find Scorpios lurking in dark alleys though, they simply operate best when they keep much of what they’re thinking to themselves. They’ll share when they’re ready to share, but they enjoy being able to run free with their thoughts, without anything contaminating them, for it gives them a feeling of independence. The less someone knows what they're doing or thinking the less able they are to try and tell them what to do. If you’re close to a Scorpio, this could make you feel shut out at times, but it’s not deliberate, as they’ll share when they’re ready to.

Because of this love of darkness and intrigue, Scorpios make good detectives or investigators and they’ll love a good mystery. Scorpios are also known to be sexy and their mysterious ways add to this reputation, but it’s not the cause. They get this reputation because of their close association with Eos, goddess of the dawn and the goddess that rules sex and eroticism. In fact, this is such a powerful aspect of Scorpio energy that the area of all our charts that rules sexual passion, is ruled by Scorpio energy. So, this is why Scorpio is known as the sexy Sign.

Scorpios are also lovers of beauty, especially in a mate, for the constellation of Scorpio is one of the most beautiful and striking in the heavens. At its heart is a giant, brilliant red star, which is why red is also a colour associated with Scorpio and is also the colour of sex and passion. The red hearts that you see on Valentine’s Day and the red that you associate with passion, especially sexual passion comes from Scorpio and the bright red star, Antares, at its centre.

The scorpion, Scorpios’ symbol, is a symbol of wisdom and Scorpios are usually wise, old souls. They’re also the only animal able to self destruct. A scorpion will sting itself if faced with danger and when the Sun enters Scorpio, the ancients saw that the Sun was being devoured by its journey into Astrological winter. As a Sign, Scorpios have a reputation for being self destructive, often cutting off their nose to spite themselves.

Scorpio is also a Sign of passion, this is because of its co ruler and before 1930 its sole ruler, Mars. Since it's discovery in 1930 Scorpio has been ruled by Pluto, a planet so similar to Scorpio energy, that it was a logical choice. Far out in space, Pluto lives in the dark and has revealed so few of its mysteries, that we know almost nothing about it. We don’t even know if it’s a planet anymore.

In Scorpio we find one of the most mysterious and misunderstood of Signs. Scorpio doesn’t operate in the light, for everything about Scorpio is hidden or dark. From ancient times the scorpion has been associated with the hidden aspects of life. It is Scorpios’ job to see the things that the rest of us miss, delving into the shadows with night vision goggles. Like all water Signs, Scorpions are ruled by their emotions.