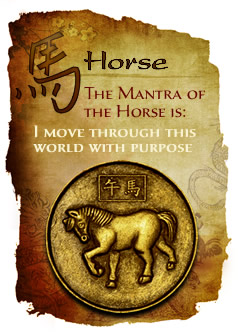 In ancient times the Horse could do more than gallop across the land, it had wings and could soar through the sky and swim in the ocean. The Horse thought it was just too cool for school and became haughty and full of his own importance began to bully the other animals.  One day the Horse was asked to deliver a message to the Dragon (now King of the Seas). When he got to the Dragon’s palace he was stopped by the guards and questioned, which the Horse didn’t like and got so mad that he kicked the guard and killed him.

This eventually got back to the Emperor who was not pleased and thought the Horse needed to be brought down a peg or two. The Emperor not only ordered the Horse’s wings to be taken off him (the cause of his pride) but that he be imprisoned under a mountain. There the Horse stayed for 200 agonising years until the ancestor of mankind was walking by and heard the Horse’s pleas for help. After all that time the Horse had time to reflect on his actions and wanted to repent by offering his services to mankind. The man released the Horse and in gratitude he dedicated his life and the life of every horse that would follow him to the service of mankind, ploughing fields, carrying people and goods and carrying warriors into battle.

By the time the Emperor was asking for nominees for the 12 Animals to rule the 12 Years of the Astrological cycle it was man that nominated the Horse, for his selfless service. The Emperor finally forgave the Horse and in the race to the Heavenly Palace the Horse came in just behind the Snake.

In 1966, the Year of the Fire Horse, across Asia the birth rate went down and the abortion rate went up. The reason I mention this, is that you might see this when you read about the Horse on some internet sites and think that there might be something wrong with being a Horse. The very reverse is true, these are colourful, independent, gregarious, friendly, adventurous and lively creatures. The reason for the panic back in 1966 was that back in the 1920’s, when those born in 1906 (the previous Fire Horse year) came to adulthood, they were off. They didn’t want to stay behind and look after elderly parents and bow to their parents expectations, they were free spirits. But times have changed and 100 years on that free spirited and independent nature is admired and we all want a little to rub off on us.

To the Horse the next adventure is just around the corner and if not, it will be the next corner or the corner after. This is a creature that thrives on tales of adventure and will enjoy telling stories about those adventures as much as he did living them. Usually the centre of attention and surrounded by friends, the Horse is frank, honest and forthright. The Horse might be quick to anger and maybe outspoken, never leaving you wondering what he’s thinking, but nothing lingers and once something has been said it’s said and there’s no point going over it.

Horses can be impulsive and no sooner than a thought is half formed than they’re galloping off in search of where this will take them. If that doesn’t work out, then something else will pique their interest. The Horse’s greatest enemy is boredom and they need to be active, preferably with their hands busy.

Horses are extroverts, they love social gatherings and being in the centre of things, they love to talk, are great conversationalists and are usually frank, saying what’s on their mind. You’ll always know where you stand with a Horse, as they’re nothing, if not brutally frank and honest. But you'll be hard pressed to find a Horse that bears a grudge.