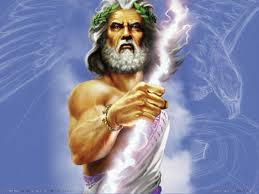 As Jupiter is the largest planet in the solar system it is only fitting that it is ruled by none other than Zeus, king of the Olympian Gods, for there is no more fitting deity. When you look into the night sky, Jupiter is the third brightest light you see, after the Moon and Venus and has been observed since prehistoric times. Jupiter has a cycle of 12 years and spends approximately 12 to 13 months in each Sign and therefore in each area of our Chart. Jupiter brings expansion, rewards and prosperity to the area of your Chart he's currently visiting, which to start with often means the good with the bad. When Jupiter turns his focus onto a new area of your Chart, while he expands the opportunities he will also expand any fears and any problems as well, but in a way and within a time frame that allows you to turn things around. This is why, when Jupiter moves into a new area of your Chart, things can often appear to get worse before they get better.

Jupiter is known as the planet of luck, but he doesn't rule things such as lotto wins or in fact gambling of any sort. This is the kind of luck that comes from having doors open where before there were only brick walls and situations where the ratio of effort versus results is seriously skewed. Whereas normally the effort you put into something equals the results you can expect to get back, when Jupiter is involved the results far outweigh the amount of effort put in, with even a small amount of effort getting more results than had Jupiter not been there. However more of nothing is still nothing, so some effort is required, which is why lotto winnings, which require no effort, aren't governed by Jupiter energy.

Imagine you were pushing an office chair with wheels across a floor with deep shag pile carpet. You can do it, but it's hard work. Imagine then if you've been pushing that same chair over a tiled or varnished wood floor. If you continued to apply the same amount of pressure you'd be halfway across the floor before you knew it. While you and the chair are the same regardless of the floor surface you're moving across, when Jupiter is in an area of your Chart he changes the type of conditions you're contending with, akin to operating on varnished floorboards.

Jupiter expands the opportunities in the area of your Chart that he's currently moving through, making things easier for you, increasing the ratio of effort put in versus results achieved. So Jupiter is the planet of luck and where he is in your Chart will be the luckiest area of your Chart, but it is still dependent on putting energy in and making an investment, for more of nothing is still nothing. It is the fact that Jupiter can spend up to a year in any one area of your Chart that gives you time to work with Jupiter, to make things happen. Quite often it's not until after Jupiter leaves that you get the results and after you've already invested as much as you can while Jupiter is here.