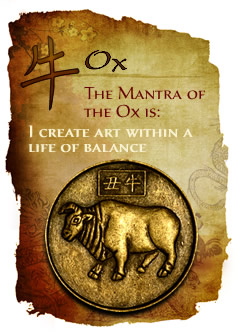 While the Ox wasn't the first of the Animals to reach the gates Heavenly Palace and was pipped at the post by the Rat, he was one of the first Animals that was nominated or invited to take part in the Race to determine the 12 Animals that would give their name to each year of a 12 Year cycle.  The Ox was originally a servant in the Heavenly Palace and because of his reliability was entrusted to deliver messages between Heaven and Earth. One year there was a famine and the Emperor asked the Ox to take grass down to the farmers so that they could feed their animals. The Emperor instructed the usually reliable and trustworthy Ox to sow a handful of seeds every few steps, to ration them out.

However, when the Ox was performing this task he was so consumed with pride and the importance of the task he’d been instructed with that he stumbled and instead of coming slowly down to earth and rationing out the seeds he tripped and fell, scattering the seeds everywhere, to a point where everything was covered in grass and no grain could grow. The emperor was so angry with the Ox that he made him go down to Earth and eat all the grass so the grain could grow.

The mortified and repentant Ox set about seeking forgiveness and making up for the pain he had caused, so instead of just fixing his mistakes he repaid his debt tenfold. The Ox, who had once ruined the farmers’ crops ended up by providing bounty for years to come. When the invitation went out for nominations to invite worthy Animals to participate in the race, the farmers gladly nominated the Ox. The punctual Ox began before any of the other Animals and actually got to the gates of the Heavenly Palace first, only for the Rat to jump off his back where he’d hitched a ride and steal first place. The Ox had to be content with second place.

The Ox is unpretentious, modest, humble and unassuming, with a quiet and steady nature, even in difficult situations. These are the quiet, strong and silent types that we all gravitate to in an emergency, for they keep their head and their cool where most of us would lose ours. The Ox is also patient and once they make up their mind that is it, they stick to it, sometimes to the point of becoming stubborn and so entrenched in an idea or a stance that they stop looking at things objectivity.  An Ox quite literally has the strength, endurance and the work ethic of an ox. They are hard working, they don’t complain, they do whatever it takes for as long as it takes to get the job done, in a slow, patient and methodical way. Because of their strong work ethic Ox are often better to working alone, where they can set their own standards and plough on.

The Ox is family orientated and a staunch and loyal friend, once they let you into their inner circle that is. They’re slow to open up at first and a little reserved when they meet someone new, until they’re confident enough to let you through their defences. If you make it through those barriers, you couldn’t wish for a better or more loyal friend.

For the most part an Ox is even tempered, but they can get hot under the collar and like a dog with a bone, if they believe they’re right they’ll argue their case and stand their ground. You don’t want to provoke an Ox, for while they rarely lose their temper, when they do it will be a doozy.

The Ox is a born survivor and can set and conquer goals, dealing with what life throws at them with tenacity and grace, but while because of this they are often successful, it’s not success for success sake. An Ox has the power to move mountains if they have to, but usually it will be because of security or to achieve what they need, not for the fame and glory. An Ox is also good with money and not prone to reckless spending. Dependable and honest, an Ox’s main challenge is avoiding letting life become all work and no play or too serious.