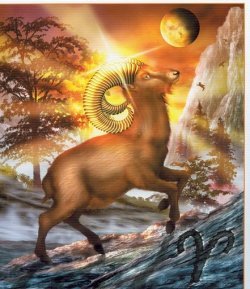 One thing you can be certain of, if you’re an Aries or you have an Aries in your life, is that life will never be dull.

Aries are ambitious, driven and confident and they’ll want to rule any roost he or she finds themselves in. Aries are leaders, always on life’s cutting edge. In adult years they are likely to be successful, because they’re ambitious and driven and not afraid to take risks. They see life as a contest, a contest they are determined to win.

It’s not end results that inspire an Aries, but the pursuit or the quest itself. An Aries must have action and movement, always mounting a quest, always staging a battle and always having something to look forward to or get excited about. Whether they win or lose is of little consequence, for it’s the thrill of the chase itself that counts. Ambitious and driven maybe, but not so much for the prize, but for the thrill of battle itself. In fact, when the chase is over, victory is gained and the spoils of war won, there is often an anti climax, until they find the next quest to get excited about or the next battle to wage, often leaving their earlier spoils to gather dust.

Aries love any and every opportunity life gives them, to wage war. It may be a battle over corporate mergers or whether you’ve put the top back on the toothpaste, for the ‘what’ doesn’t matter. It won’t matter what they’re battling for, they’ll just love to battle and to butt heads.

This all comes down to their cosmic DNA. Aries is the first Sign of the zodiac and when the Sun moves into Aries each year, a new Astrological year is born. Aries leads us into the new Astrological year, at the head of the parade and they’ll stay there for the rest of their lives. They’re leaders, not followers and like to be the ones making the setting the pace, leaving footprints for the rest of us to follow.

Astrology has many roots and in Aries we find the Ram, able to butt their way into situations so they can be Number One. Rams are the Alpha Males of the sheep world, kings of their domain and very territorial. Behind the Ram we find Aries’ ruling planet, Mars.

Mars is ruled by Ares, God of War, which is where an Aries’ need for battle comes from. They are fiery like the planet Mars. They’re passionate, warlike and like Ares, they’re instigators, inventors, planners and forward thinkers, just like the energy of the time of their birth. As a Fire Sign, they’re fiery and passionate. One of the myths behind Aries is Jason and the Argonauts. Aries love adventure and if they’re not taking part in one themselves, they’ll love to read about them, watch them on DVD or play computer games, the more exciting and action filled the better.

As a Cardinal Sign they’re the ones who come up with the ideas that inspire and motivate the rest of us. Aries don’t always finish what they start, but that’s for other Signs to do. As they get older they learn how to stick to task, but it’s not in their nature to do it automatically. Aries energy relies on having a good team around them that can follow through on the practical details, while they’re free to develop even better ideas. Or it could be that they get good at attracting people into their life, that are good at reminding them to stay focused. Aries are inspirational leaders, inventors and inspire passion and a fighting spirit in all of us.

Aries are Cosmic Crusaders born into a world they will try and conquer, right from the word go. Aries are born ready.