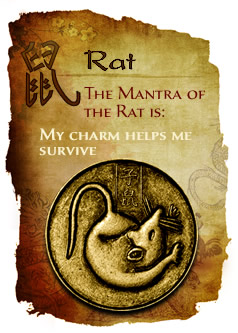 It was the Jade Emperor who devised a race to find the 12 Animals to represent the 12 years and while some animals were nominated, others like the Rat nominated themselves. While many Animals were invited to take part in the race to the Heavenly Palace, which included a swim across a river, it was a case of first come first served, with the first 12 to reach the Emperor not only the 12 Animals that would forever rule the 12 lunar cycles, but the order they came in determining their ranking. It’s not surprising then that as well as making the Top 12, that each wanted to be first or as close to first as possible.

The Rat knew that no one would be nominating him, that he didn’t qualify because of his good deeds and also that he wasn’t the fastest and he didn’t have the physical size or strength that the other animals had and therefore that the odds were stacked against him. The Rat had only his intellect and cunning to call on and at the end of the day they put him in first place. After first trying to hitch a ride on the Horse’s back the Rat eventually jumped on the Ox’s back, figuring that the always punctual Ox may take longer to get there, but he’d start out before the other Animals and would probably be the first to arrive.

The Rat was right, the Ox was the first to arrive, so early that the gates to the Heavenly Palace weren’t even open. Yet just as the gates began to open the Rat jumped down from the Ox’s back and ran through the gates. The Ox complained to the Emperor, but he was so impressed with the Rat’s ingenuity that he ignored the protest and the Rat became the first Animal of the Chinese Zodiac and the first of the 12 lunar years.

Rats are real go-getters, working best when they are the underdog, able to spot an opportunity before anyone else and they’re prepared to take a risk. They’re resourceful (some say cunning), but they’re always likely to be one step ahead, not only alert to opportunities but potential problems as well. Because of this Rats are known to be great organisers, as they’ve thought ahead and are prepared for all contingencies. A Rat is always in alert mode. Not afraid to take risks and push their way to the front of the queue, the Rat is always ready to give things a go.

Rats are known to be very charming and are great ‘talkers’, but they also get things done, rolling up their sleeves and making things happen. Rats are resourceful, adaptable and if a situation changes on them it’s unlikely to throw them. However, a Rat likes to keep things close to their chest, especially if they’re working on something, regaling you with the story of how they pulled something off, after not before the fact. Because of this, Rats are a curious mix of having a talkative but also a secretive nature, choosing when to share and when to keep quiet.

Rats are also known to be smart and intelligent, especially in the ‘street smart’ kind of way. Rats also have a keen eye for a bargain and are known to be thrifty.

Rats are observant, great planners, are analytical and will go through a project in their mind and look at it from every angle before taking action or getting others on board to do the hard work. While Rats are known to be cunning it’s more that they observe and that they are opportunists, ready to seize the moment and an advantage, but they are honest. They are resourceful, adaptable and quick thinkers, but they can also be worriers and over analytical, over thinking things.

The Rat is also a curious mix of social butterfly and loner, needing time to think, let their imagination run wild and think things over, but also loving social situations, especially where there is lively debate.