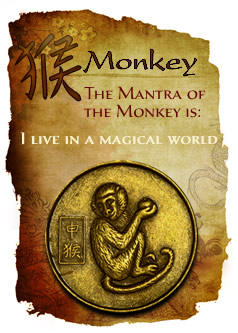 The Monkey made it into the Race to win the right to compete for one of the 12 slots available, to represent the 12 Animal signs for one reason and that reason was friendship. The Monkey and Tiger were next door neighbours and good friends and because the Tiger was so fierce and scary he didn’t have many friends, so he valued his friendship with the Monkey, his only real true friend.

One day that friendship was put to the test when the Tiger got caught in a hunter’s net. The Tiger was hopelessly stuck and had no way of freeing himself and cried out for help. His friend the Monkey heard the Tiger’s cries for help and quickly ran up the tree, untied the ropes holding up the net and freed his friend.

The Tiger was a bit dubious about this as he had a reputation to maintain and what if the Monkey told the other animals, he’d lose face! The Tiger knew he owed the Monkey a debt and he didn’t like it, so he considered killing the Monkey to keep him quiet. But after thinking it through the Tiger realised that if he killed his only friend he’d be lonely, so he decided to help the monkey and in that way repay the debt and they’d be even.

This was just when the Emperor was taking nominations for the race to determine the 12 Animal Signs and while the Tiger was right at the top of the list the Monkey wasn’t even a consideration, as he did nothing to help mankind. However, the Tiger petitioned the Emperor on the Monkey’s behalf, praising the Monkey’s intelligence and loyalty. This secured the Monkey a chance to compete to become an Animal Sign and repaid the debt that the Tiger didn’t like hanging over him.

The truth is that Monkeys are the one Sign that you can trust a secret to, but ever since then Tigers and Monkeys have both held a high regard for friendship.

I have a son who is a Monkey and long before I knew anything about Chinese Astrology or what Sign any of my children were, I called him my Monkey, only to find out later that he was indeed a Monkey. Monkeys are everything you think of when you call someone a Monkey, they are charming, rakishly mischievous and so devilishly cute that they get away with it. There is something Peter Panish about the Monkey, in that part of them never entirely grows up. Monkeys are smart, with the kind of natural intelligence that allows them to land on their feet, find the right words at the right time and more often than not are able to talk themselves out of trouble.

Monkeys are usually charming and charismatic and usually have a robust social life. Monkeys are also great at adapting and blending in, finding themselves at home in all types of situations and groups and actually thriving on the diversity. If a Monkey travels to a foreign country they’ll want to go off the tourist routes, getting in touch with the real people, soaking in the different and varied cultures.

Monkeys are also very open and honest, which can lead them to being too frank at times. Yet there is no malice behind it and instead you have here a warm hearted soul and always a good friend to anyone in need. If you're feeling down a Monkey will always cheer you up, for they are naturally funny with an impish sense of humour and they quite literally like to monkey around. Monkeys have energy to burn and are often sporty, athletic or can be adventure or adrenaline junkies.

Monkeys love to travel and explore and their adaptable nature allows them to quickly acclimatise, always landing on their feet.