Astrology is quite literally, the 'science of the stars' and is as alive and as relevant today as it was thousands of years ago.The Sun, Moon and planets are constantly in motion, in a dance that not only influences our own personalities, determined by when we were born, but also the conditions that are impacting us on a daily basis. It is these influences that I look at, when writing your horoscopes. Behind the Sun, Moon and the planets is a rich history that involves the constellations, the gods, myths and the astrological seasons, each having their impact on conditions now.

When Astrology first evolved it was nothing more than a way for the ancients to master the seasons and to predict, through signs in the heavens, the passage of time. In a way, the heavens and the regular patterns of the Sun, Moon and stars, were one vast clock, calendar or almanac. Every ancient culture had a form of Astrology and the ancients used their knowledge of the stars to firstly understand and then master the seasons.

Astrological records date back 7,000 years but it was the Greeks who gave us the Astrology that we recognise today. 5,000 years ago the Greeks developed the 'zodiac', when means 'circle of souls and animals'. The zodiac is a 360 degree ecliptic (path or band) of just 9 degrees either side, so fairly narrow. The ancients imagined the zodiac (with the earth in the centre) as a giant band stretching around the sky. Around this band moved the planets, constellations, stars, Sun and Moon. Of course their are far more constellations in the heavens than the 12 we are familiar with, but it's those that move along this narrow band that represent the 12 Zodiac Signs that we know today. 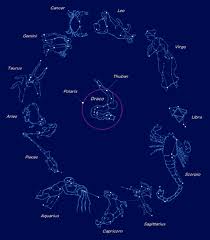 While Astronomy or the study of the stars and Mythology developed as separate sciences thousands of years ago, they eventually merged to create Astrology, which is part astronomy and part mythology. The first aspect of Astrology that the ancients developed was naming the constellations. They looked up into the sky and saw pictures. These pictures became 'the Ram', 'the Twins', 'the Crab', 'the Scales' and so on. To them the constellations weren't a random cluster of stars or even simply pictures, for behind the pictures that they saw in the heavens were rich tales and the influences of the gods and goddesses that influenced life on earth.

The second aspect is the seasons, which were all important to the ancients. There were no supermarkets, no weather reports or agricultural colleges. They had to rely on their ability to 'read the seasons'. The year is made up of four seasons - spring, summer, winter and autumn. Knowing how to 'work' these seasons was their link to survival. For them spring wasn't a just a 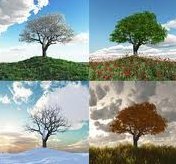 time of new blossoms, it was a return to hope, the knowledge that they had survived the winter months and that they would get a second chance. The ancients needed to know when to plant, when to reap and when to sow and they did this by observing and over time predicting the coming seasons, by the position of the Sun, Moon and stars. In the 21st Century the seasons are merely a backdrop to our lives, but to the ancients life revolved around the seasons and the stars that predicted those seasons. Those that could read the seasons well, survived and those that didn't, perished. In the natural order of evolution and survival of the fittest, those who could understand and read the stars and the seasons or who had people within their community who could, survived and reproduced. It's the genes of those survivors that live on in our own DNA. The seasons play an important role in the makeup of each Star Sign and the ancients wouldn't have referred to someone as being born, say in the Sign of Aries, rather as being born in the season of Aries or the season of Taurus. 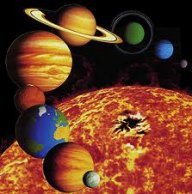 The third aspect is the Sun, Moon and planets. The word planet is Greek for 'Wanderer'. The ancients soon noticed that most of the stars moved in unison, a giant kaleidoscope of pictures moving through the heavens as a block. But amongst them the planets had their own movement, hence the name 'Wanderers'. These movements were studied and the planets were given names, their paths, cycles and patterns plotted over thousands of years, to a point where they were predictable to an accuracy that astounds us today. Not all the planets of our solar system are visible to the naked eye so therefore weren't visible to the ancients, so don't form part of ancient astrology. We still refer to these planets as the 'ancient planets' and the ones discovered after the invention of the telescope as the 'new' or 'modern planets'. The heavenly bodies the ancients knew about were the Sun, Moon, Mercury, Venus, Mars, Jupiter and Saturn. However texts have been discovered that indicate that they knew of other planets and it is even suggested that Uranus, not discovered until March 1781, was known to the ancients. Even now Uranus can be seen with an ordinary pair of binoculars and if you know where to look, some say that they can see it with the naked eye, which suggests that if the ancients didn't know Uranus was a planet, that they at least suspected that it was. 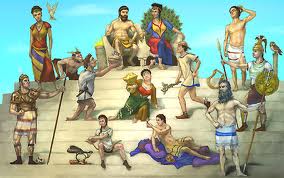 The last aspect, after the constellations, the seasons and the planets is the gods and goddesses behind both the planets and the constellations. Now we talk about the planets or houses in our charts as having rulers or being ruled or governed by a god or goddess. For example we say that Taurus and Libra are ruled by Venus, who in turn is ruled by the goddess Aphrodite. But to the ancients, when they looked towards Venus they saw Aphrodite herself, not a planet ruled by Aphrodite. To the ancients it was the gods and goddesses themselves moving across the sky, looking down upon humankind and influencing their lives.

These influences formed a predictable pattern, which over thousands of years become so part of the collective psyche, that people born under those influences developed personality transits that connected them to the time of year that they were born. Over thousands of years, these became the personality traits of the 12 Signs. Today each and every human being on the face of the planet has encoded into every cell, the DNA of 100 million ancestors and these ancients can be traced in a direct line, to ancient societies that observed, mapped and lived their lives by the stars and the seasons.

So how does Astrology work? To be honest I don't know. I can understand and explain where it came from, what influenced and created Astrology as it is today and I understand the cycles, the planets and all the other influences, but how it actually works, I don't know. But I do know that it does. I have been writing horoscopes professionally since 1997. These Horoscopes have been published 7 days a week, 52 weeks a year for well 15 years now and I can see what I write being played out in my own life, the lives of those around me and in the experiences of people who email in to tell me. So I know that it does work and that it does influence us, but the mechanics behind how it does, I wouldn't even try and explain.