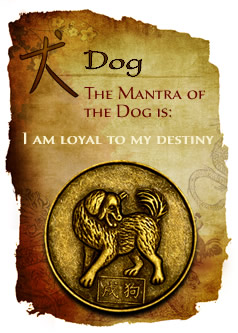 As you can imagine, when the selection process for the 12 Animals began there was no competition as fierce as that between the Cat and Dog, each wanting to prove to the Emperor why they should be chosen. The argument they presented was all about food and how helpful or useful they are. The Cat went before the Emperor and told him that the dog ate too much and didn’t do anything useful except guard the house. The Dog on the other hand argued that the Cat ate all the best food and didn’t do anything except chase the mice away. The Emperor asked the Dog how much he ate and he answered truthfully, saying that he ate one bowl of food every mealtime. When the Emperor asked the Cat he lied, saying he only ate a small bowl every mealtime. Taking them on their word the Emperor said the Cat had greater claim, but they could both take part in the race.

On the day of the race the Dog got up early and got a good position, however when the Cat turned up he was so worried about the Dog attacking him because of the lies he told that he let the Dog go first and fell so far back that he came in after the Pig, the last of the 12 Signs and missed out altogether. Dogs to this day are known for their honesty and this is what gave them a position as one of the Animal Signs and a Cat, who lied, missed out.

It was the Cat’s nemesis the Rat that came in first and to this day it’s said that cats chase mice because they feel they cheated out of their position and dogs chase cats because they tried to cheat them.

There is no Sign as loyal or faithful as the Dog. They are honest, courageous, have big hearts and will do anything and go to the ends of the earth for a friend in need. Dogs are particularly empathetic and also sensitive to injustice, not just when it affects them but even more so when it affects others. The Dog is honest and can be trusted, which is why this is such a loved Sign and why they usually have many friends and are held in such high regard. Some people are givers, some are takers and some have mastered the art of give and take – the Dog is a giver. They are generous to a fault, ready to give the shirt off their back, but more importantly to listen and be there. A Dog seems to know what a friend needs before they do and before they even know to ask to help, the Dog is there offering it. That’s because they are always alert and always on call, just in case they are needed.

Dogs are also really good at keeping a secret, appreciating the trust that has been put in them and not wanting to violate that trust. Part of that is that the Dog wants to foster a trust that makes them the ‘go to’ person if someone has something to get off their chest, because they love hearing and being privy to the stories and while their friends love the fact that they are being listened to and the Dog is so interested that they ask questions and get out all the information, it’s more that the Dog is inquisitive and wants to know because they are curious.

The down side to the Dog’s empathy is that there are times when they can’t do anything and especially when it’s out of their control to do anything. Dogs probably turn off the TV when news comes on about natural disasters or events where people are in need, for if it was a friend they could do something constructive, whereas if it’s something they only hear about this doesn’t allow for a constructive outlet. For that reason Dogs often avoid wanting to know or hear about anything they can’t do anything about.

The Dog’s biggest challenge is to realise that they can’t solve every problem and be there for everyone. However because of this you often find Dogs going into professions where they can fight for the underdog.