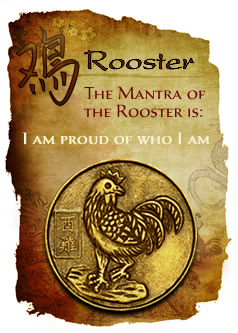 The Rooster went away and thought about it for a while and eventually decided that he would use his voice to wake people up in the morning, so they wouldn’t sleep in and could wake up in time to go to work and take care of their chores. The people were so grateful that they petitioned the Jade Emperor to include the Rooster and even though flying birds weren’t allowed in the race he not only made an exception, but placed a flower on the Rooster’s head in gratitude.

During the race the Dog and Rooster were neck and neck, but just as they were nearing the finishing line the Rooster flapped his wings and that gave him a narrow edge, coming in just before the Dog. Ever since then the Rooster has had a strong sense of duty, aware that he was only included because of a need to be of service.

A long time ago I heard an old story that the Rooster forces himself to get up in the morning and to crow at the rising sun, because if he didn’t the Sun wouldn’t rise and that would be calamity. This is part of the reason why Roosters are said to have big egos, but having a Rooster as a sister I don’t agree with that. I see this as coming from the ultra sense of responsibility that Roosters feel, that it’s up to them to organise and fix things and if they don’t, then just imagine what might happen. When my sister starts worrying too much and starts to get into a flap, wondering how she’s going to do this and if she should do that and how can she organise that, I make a few clucking sounds, just to remind her that she’s being a Rooster.

Roosters not only feel that it’s their responsibility to organise things and have things running smoothly, but people really do lean on them and expect them to be their rock because they are such good organisers, have good common sense, are practical, resourceful and know exactly what to do in an emergency or crisis. The problem is that there isn’t always a crisis and things don’t always need to be micro managed, so Roosters can worry and over think things at times.

What you will find in the Rooster is a great friend and they love conversation. A Rooster without a healthy social life is likely to feel a little flat. Roosters can be blunt, but it’s because they believe that honesty is always the best policy and that they’re not doing anyone any favours by sugar coating things. While a Rooster is great to have around in a time of crisis their real friends get to enjoy the fact that they’ll always get good, honest advice and undying loyalty.