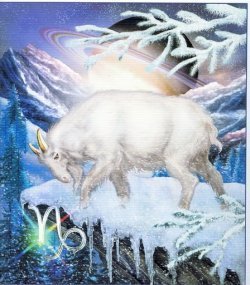 In Capricorn we find one of the strongest and most enduring of all the Signs. Capricorns are able to overcome insurmountable odds, stick with something for long and climb higher than their cosmic mates. This comes from their symbol, the goat. The easy, gentle plains aren’t for the mountain goat, with grazing on life’s pastures all too boring and mundane. They want to be up on the craggy heights, facing danger and pushing themselves to the limit, in order to find that one piece of foliage, hanging from a crevice or on the side of a cliff. Why do they do it? The same reason a Capricorn does, because they can and because they feel driven to push themselves to the limit and look down from the summits and peaks they’ve conquered, knowing that they did it.

Because of this Capricorns are often successful in life, because they soldier on long after the rest of us have given up and it’s this quality that has given Capricorn rulership of the career and professional sector in all our charts. In order to be successful in life, we all have to push ourselves and that comes naturally for a Capricorn.

If you look closely at the symbol for Capricorn, you’ll see that it looks like a V with a tail. That is because the V represents the goat’s horns and the tail really is a tail, a fish’s tail to be exact. Capricorn’s real symbol isn’t the mountain goat, though he is part mountain goat, it is the ‘sea goat’, with the head of a mountain goat and the tail of a fish.

So, while Capricorns are able to climb life’s mountain peaks and succeed, they’re also able to plumb the emotional oceans of life and one of the least known qualities about a Capricorn, is how spiritually in tune they are. Many Capricorns have an inexplicable sixth sense that comes from this aspect of their nature. Capricorn is a complex and contradictory Sign and this comes from it being part goat, part fish. The Goat Fish is a mythical figure and over the years has been known as such things as the ‘god of wisdom’.

Capricorns are known for their wisdom, common sense, ethics, integrity and principles and while this comes mostly from their ruling planet, Saturn, it also comes from a deep sense of knowledge and understanding that comes down through the Goat Fish.

Whether it’s world events, business or personal matters Capricorns not only like to get involved, but they like to take a dominant role. Some may see this as controlling, but Capricorns have firm ideas, a strong moral compass and the strength and determination to stand behind their convictions and principles. Because of this Capricorns have always been regarded as leaders and often assume a leadership role.

Yet despite all that authority, confidence and worldliness, they are very human and spiritual beings, very much in touch with their own psyche. Again, this is because they are part goat, part fish. It’s the goat aspect we most associate with Capricorn, with their courage, high aspirations, perseverance and surefootedness, allowing them to survive in any condition. Capricorns are true survivors.

Capricorn is a powerful Sign, often very rigid, but with a lot of patience and strength. Capricorns are patient because they understand the cycle of time and that everything has its season and you can’t rush that. Capricorns know that there are boundaries that you don’t cross and that just as nature does, they must bow to life’s cycles. As an Earth Sign Capricorns are practical and have a strong grasp on reality. They can see things for what they are and rather than try and change them, are experts at how to work with them.

Capricorns are smart, but as a practical Earth Sign they accomplish things through action not words. The gift that Capricorns possess, is an awareness that as one thing ends, something else begins or that as one door closes another opens. They are aware of the natural laws of the universe, the cycle of life and they use that to their advantage.