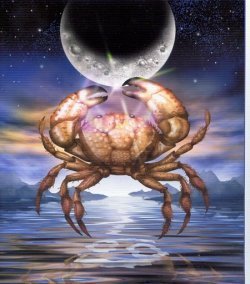 The Constellation of Cancer, was placed in the heavens by Hera, as a symbol of gratitude for the crab’s faithfulness and devotion and this comes down as one of Cancer’s main characteristics, that of devotion, loyalty and faithfulness.

Don’t underestimate this meek and mild mannered Sign, for behind the gentle and winning ways of the emotional, Water ruled Cancerean beats a strong and determined heart. Even their tenacity, some would say stubbornness, can be explained by the position of two stars above the Crab, known as the ‘Asses’. Stubborn as an Ass may be true for many Cancereans, but they’re not placed there for their stubbornness, but for their devotion and refusal to give up despite the odds.It’s these two stars that also give Cancereans their reputation as very sensual and fertile lovers, for the Ass is an ancient phallic symbol, central to many ancient fertility rites.

Cancereans get a lot of their qualities from their animal symbol, the Crab. Ambitious, both the animal and the astrological crab are equally at home in the water and on dry land and while Cancereans can swim in their emotions and become very emotional, they’re able to climb out of them when they need to, revealing a very ruthless and assertive competitor.

While Cancereans and crabs are non confrontational, when forced to defend themselves their defence system is formidable. They don’t like to fight, preferring instead to retreat into their shells, but when forced to, especially if those they care about or their security is threatened, they’ll attack with force. Cancereans are also very adaptable. Even if a crab has a leg bitten off in an attack, he’ll simply grow another one. Cancereans approach life in the same way. If something is lost, they simply adapt and grow from that.

Yet Cancereans, for all their determination can be very hesitant. This is because on the Summer/Winter Solstice, the day the Sun moves into Cancer, the Sun itself is seen to pause in the sky and appears to hesitate before moving forward. It’s from that that Cancereans have developed this as a trait. Though just like the Sun, once they’ve made up their mind, heaven and earth combined, is unlikely to get them to change it.

Never one to confront a situation, Cancereans are content to side step and hide behind their defences. Another unlikely quality that Cancereans have got from their animal counterpart is their intuitive, some might say psychic abilities, both able to sense danger through ways that seem impossible to explain. The most famous Cancerean trait and the one others will be most familiar with, come from Cancereans ruling body, the Moon. It’s from the Moon that Cancereans get their famous moods, for they are very much influenced by the cycles of the Moon and by their emotions.

Cancer has always been the Sign most linked to Motherhood for the goddess who rules the Moon, in her most ancient form also rules childbirth and Cancereans have long been known as the nurturers of the zodiac. Soft, sweet and emotional on the outside, they are made of much tougher stuff than most of their zodiac mates appreciate, but then that’s their secret weapon. They are also born hunters, never happier than when the on the trail of something they're after.
To read more about the origins of these characteristics came from and the history that makes a Cancerean who they are click here