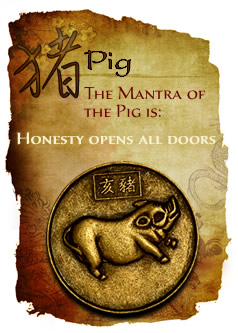 The first 11 Animal Signs were either chosen by the Emperor, nominated by someone or got there by their own stealth; the Pig came to be an Animal Sign through different means. In ancient times there was an official who had no sons to carry on his name and family line. The man gave many offerings to the gods and eventually they answered his prayers. But while the son’s horoscope foretold a promising future, the son was lazy and spoiled. Once his parents died the son quickly squandered his fortune and died in poverty, without continuing the family line.

When the son arrived in hell he complained that he had been cheated out of the life that was destined for him, but when the Jade Emperor reviewed the man’s life he saw that it was the man who had squandered his own life. The Emperor punished the son by ordering that he be reborn, condemning him to being ‘reborn as a pig, feeding up on the chaff’. However, in Chinese this sounded like and was misinterpreted as ‘becoming an Animal Sign’, so the Pig got there by accident. This was a lucky accident and one of the reasons why the Pig is considered a lucky sign.  The son was not only reborn as a pig, but as The Pig, the Animal Sign. The reason why the Emperor decreed that the son come back as a Pig was because he needed to learn the lessons that the pig could teach him. In ancient times the Pig was considered noble, putting others and especially family ahead of their own needs.

The Pig is known for its honesty, its affectionate nature but also for its love of the finer things in life. When you meet a Pig for the first time you may find them reserved, standing back until they feel comfortable and therefore they often come off as being shy. Even though Pigs often have a wide circle of friends, it’s only their closest and oldest friends who ever really get to know them well. There is something childlike about a Pig, which along with their enthusiasm to try new things, be the first to try something new or to take risks, often means that they make mistakes or that they begin new things but don’t finish them. However, they are prepared to give things a try and if it doesn’t work out, then ‘c’est la vie’!

Pigs are genuine, honest (sometimes naively so) and are always there for the underdog. If faced with a problem a Pig is unlikely to immediately spring into action, preferring to go away and think their options through. A Pig will look at a problem from every angle and in most cases will find a solution or an answer.

Pigs tend to be passive rather than confrontational, preferring a ‘let and let live’ motto. However, a Pig is not weak and will stand up for a principle, friend or cause, but only if they have to or are backed into a corner.

Pigs are adaptable, charming and are great friends and this unlocks many doors for them. They are not overly ambitious and they’re not power hungry and they’re not well suited to the cutthroat world of business or the backstabbing that sometimes litters the path to success. It’s when a Pig has a purpose that they will rise to the occasion, especially if they are forced to defend themselves or others.

The Pig is highly intelligent, with a hungry mind and a thirst for knowledge. They are also very accepting of others, unlikely to pass judgement and willing to accept people for who they are, making them unpretentious. With a love of the finer things in life and of beauty in general, a Pig’s home will always be welcoming and well presented.

If the Pig does have a fault it is that they hold things in and not wanting to be confrontational can hold onto feelings or grudges that are better expressed. They also tend to hold onto their worries, feeling that it’s their responsibility to solve them and they don’t want to burden others.