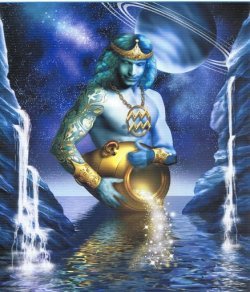 Aquarians are almost otherworldly and see themselves as members of one big global family. This is because of their ability to lift themselves out of their own reality and to truly empathise and relate to others. All of us will be familiar with the symbol of Aquarius, the Cup Bear, pouring liquid from a large urn. This is Ganymede, the first mortal ever to be made immortal and the liquid he’s pouring, is the nectar for the gods.

Because Ganymede was able to traverse between heaven and earth, he saw it all and understood it all, which is why Aquarians are able to see and understand it all and what makes them so connected to humanity, world events, politics, a sense of community and social injustices. They have a vantage point that the rest of us just don’t have. Aquarians see both ‘what is above and what is below’, which is what the two squiggly lines that represent Aquarius represent.

Aquarians were born with a sense of importance, but I’m not talking self importance. They were born knowing that it is their duty and obligation to make a difference and to become involved. They can’t turn away from what they see. Because of this you often see Aquarians in politics, the helping fields, becoming involved in community affairs, acting as spokespersons, social workers, as environmental activists, protesters or in some way educating and helping others. Aquarians identify so much with others that they have to act, become involved, get out there and make a difference, even if that’s just by being a good friend.

Yet their focus is more on the collective, rather than an individual. While they are caring, loving people, it’s the group that their focus is on. They’ll stop and help a friend in need, but they’d rather put their energy and time into a group effort and support a large number of people. Because of this Aquarians have often had a reputation for being unfeeling and in some ways aloof. They are an Air Sign, so they don’t show their emotions easily, but it’s not that they don’t care. They care TOO much. If they gave as much energy to every individual as they expend on a wide group, they simply couldn’t cope.

Aquarians are also very inventive and as an Air ruled Sign are intelligent. Although smart and clever, their brains are hard wired towards inventiveness. While they’re able to understand and explain tangible concepts easily, what excites them is the intangible.

This is the Sign that is forever riding at the leading edge of convention and conformity, always testing it to the limits and on the cutting edge of new discoveries. Aquarians are able to see further into the future and to greater heights than the other Star Signs and it was an abundance of majority planetary activity in Aquarius in the 1990's that saw the birth of the technological revolution.

Aquarians are fiercely independent and while they will move heaven and earth to gain advantages for others, they rarely remember to do so for themselves. They are notorious for forgetting that they have needs as well and one of the greatest battles an Aquarian has, will be to separate themselves from the needs of others. Even when they have their own battles to fight, they easily turn it into a social cause or campaign, figuring that if they’re suffering from an injustice or struggling with something, then others must be as well. They justify fighting their own battles, by integrating them into something that is affecting not just themselves. You're more likely to find Aquarians on community committees or on the PTA, working to make a difference, sensing that it's their job to become involved.

This is the Age of Aquarius and Aquarians are children of this New Age. They are a breath of fresh air and they continually strive to create a better future for both those they care about personally and us all. When a child dies in poverty on the other side of the world an Aquarian doesn’t just shed a tear, they do something about it, even if it’s to make sure that their own family, neighbourhood or community doesn’t go hungry.