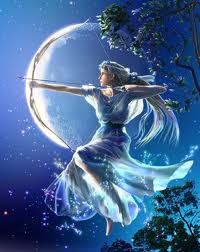 There's not a lot I can tell you about the Moon that you don't already know, for it is the most well down of all our cosmic neighbours. We are all very aware of where the Moon is, we can tell what stage of the lunar phase we're in just by looking at the Moon and we know from experience the effect that the Moon can have on our moods and our emotions.

The Moon is not a planet as such, for it orbits the Earth not the Sun and is our only natural satellite. It takes the Moon around 29 days to complete its orbit, covering a degree in 2 hours and spending around 2.5 days in each Sign. In our birth chart, this is long enough to stamp us for life. It's as though a snapshot was taken of the sky and the Moon was captured, in its exact position, where it will be forever locked. The Sign that the Moon was in when you were born and the exact degree that it was placed will never change and this becomes part of who you are, your emotional centre. Regardless of which Star or Sun Sign you were born under, your Moon represents the inner you. Only 1 person out of every 12 has their Moon and Sun in the same Sign so most of us have very different emotional centres, to our outer personality, which is reflected by where our Sun is located.

We are all influenced by the four phases of the Moon, which are the New Moon, the First Quarter Moon, the Full Moon and the Last Quarter Moon. A lunar cycle, which lasts around 29 days begins with a New Moon.

During a New Moon you can't actually see the Moon, because it is completely obscured by the Earth's Shadow. For this reason a New Moon is sometimes known as a Black Moon, which simply means that we can't see it. A New Moon represents a time of new beginnings, a time to initiate new things or to start over. Not only will you be riding on the tailwind of a waxing Moon, with lunar energy increasing, the Moon and Sun are aligned, so you have combined lunar and solar energy working together, on the same page. Even plants that are planted on a New Moon grow faster. A New Moon always falls in the same Sign that the Sun is located at the time and during a month long period of focus, this is always the best time to take action.

During the period from the New Moon to the First Quarter Moon, which occurs around 7 days after a New Moon, we are still initiating new things and taking action, but during the 7 days between the First Quarter Moon and the Full Moon, the focus is on consolidating and working to improve, maintain or to push forward on anything initiated, during the first 7 days of the lunar cycle.

A Full Moon falls around 2 weeks after the New Moon and by this time the Moon has reached the halfway point in it's cycle and it is now opposing the Sun, having reached a point where the Moon is now on the opposite side of the sky. This puts the Sun and Moon in opposition, so there is often more pressure and tension around the time of a Full Moon. This represents a time when anything that is going to come to light following the New Moon will have come to light, so you have all the information you're going get or need to have. It is not a good time to take action, because from this point on the Moon will start waning, but it is a good time for wake up calls and to start reaping what you've sown.

Occasionally, if a New Moon falls very soon after the Sun arrives in a Sign the next New Moon will fall just before the Sun is due to leave, so we will have two New Moons in one Sign. This is considered especially auspicious.

The other lunar events are eclipses, with a solar eclipse happening on a New Moon and lunar eclipse happening on a Full Moon. Where eclipses fall is determined by where the lunar nodes are located, those points in the heavens where the Earth's orbit around the Sun is intersected by the Moon's orbit around the Earth. On average we have 4 eclipses each year, two lunar eclipses and two solar eclipses. Twice a year, six months apart the Moon moves into the part of the sky where the lunar nodes are located at the time. When this happens we experience two eclipses, a solar and lunar eclipse 2 weeks apart. It's interesting to note that we are the only planet in the solar system that can have a total eclipse and that is because the Moon is exactly the same distance to the Sun, as it is smaller - therefore, they appear to be the same size - at the moment! If the Moon were any bigger or smaller, closer or further away it would alter its size and the Sun couldn't completely block out the Moon and vice versa. However with the Moon gradually slowing the Earth down and at the same time moving away, in a few million years we'll no longer have total eclipses.

A solar eclipse has all the characteristics of an ordinary New Moon, but in addition has an element of fate or inevitability woven in. It is always a lot more powerful than an ordinary New Moon and because either the North or the South Node are involved, it is often a time for major new beginnings, a major life change or a real crossroad. Depending on which area of your chart this falls, there are likely to be big changes, major new beginnings and some important new doors opening. It is quite rare to witness a lunar eclipse and even more rare to witness a total solar eclipse. With a path of visibility of just 80 kilometres wide, it is said that if you sat in the same place, waiting to witness a total solar eclipse, you would have to wait 340 years.

A lunar eclipse has all the characteristics of an ordinary Full Moon, which means that things are coming to fruition, but in a major way, often indicating something coming to a close, to a head or than an important door or chapter is closing. In the same way that a solar eclipse brings North or South Node energy into play, there is an element of fate involved as well. So long as it is dark where you are and you're able to see the Moon, then you will be able to see a lunar eclipse. Sometimes the effects of a lunar eclipse are so slight that there is just a slight discolouration, often turning a pinky colour. Sometimes part or even the whole of the Moon is blocked out and this determines whether this is a partial or a total lunar eclipse.