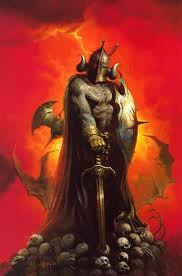 Until 2006 Pluto was not only the last known planet in our solar system, it was officially a planet. Now Pluto has been reclassified as a planetoid or dwarf planet, though Astrologically he is still a planet and he has a further out neighbour. Eres, discovered in 2005 is also a dwarf planet and is also larger than Pluto, so while some of his status has slipped over recent years, Astrologically is still one of the most important of all the planets. Even though the scientific community has recently downgraded Pluto's status as a planet, labelling him a planetoid or a dwarf planet, that has in no way diminished his Astrological clout. Pluto is a rebel and operates best when he's outside the mainstream, where he doesn't have to conform, so I suspect that he's secretly pleased about this, not wanting to be labelled along with the other planets.

Pluto wasn't discovered until 1930, extremely recently in terms of the planetary discoveries and then only by accident. This is why Pluto is sometimes referred to as the Accidental Planet. Pluto was given the name Pluto in keeping with the rest of the planets and moons in the solar system, that were all named after Greek or Roman Gods and also because P.L. were the initials of the man who though he didn't discovery Pluto, is responsible for its discovery. Percival Lowell proposed that, using a calculation called 'Bodes Law', that Planet X should be found in the point of the skies where Pluto was discovered. Percival Lowell believed that there was another planet beyond Neptune, because of its strange behaviour. He thought that Neptune's orbit was being influenced by an unknown and undiscovered planet, who's gravitational pull was impacting on Neptune. Lowell used 'Bodes Law', a hypothesis that used mathematical equations to predict the sequences and distances between the planets. It had worked when you applied it to the known planets and it even worked with predicting the orbits of Ceres and Uranus, so it was thought at the time to be accurate.

So convinced there was another planet, based on Neptune's behaviour, which is now known to be caused by Neptune's interaction with Uranus, both now known to be bigger than it was originally thought and using Bodes Law, which has since been proved to be simply a coincidence, Lowell who founded the Lowell Observatory in New Mexico stuck a pin in a sky map (maybe not so literally) and said 'There's where you need to look for your planet'. Lowell called this planet 'Planet X'. While Lowell died in 1916, 14 years before Pluto was discovered and it was Clyde Tombaugh, a 23 year old amateur astronomer, working from the Lowell Observatory that discovered Pluto. While earlier photos were taken that in hindsight revealed Pluto's existence, it wasn't until January 1930 that Tombaugh was pretty sure that he'd found it. However news of Pluto's discovery wasn't telegraphed to the world until the 13th March 1930. The 13th March appears to be an auspicious day for discovering planets, because Uranus was also officially discovered on the 13th March, except in 1781.

So in keeping with the huge role that Percival Lowell had in the discovery of Pluto, the PL in Pluto are his initials, while the dark, secretive world of the outer solar system was the perfect home for Pluto, known in Greek mythology as Hades, Lord of the Underworld. Considering that Clyde Tombagh, the man who discovered Pluto only died in 1997, this is a very new discovery. Another interesting aside to the story of Pluto's discovery is that when the New Horizons spacecraft was launched in 2006, which will eventually do a flyby of Pluto in 2015, giving us our first real look of Pluto, on board were some of Tombaugh's ashes.

Pluto is the Roman name for the Greek god Hades - Lord of the Underworld. This is a very apt name as Pluto, a planet in perpetual darkness and until modern times, was unseen. Pluto was given rulership of Scorpio, the most secretive of the Signs, which until less than 100 years ago was ruled by Mars. After the discovery of Pluto, Mars remained as co ruler of Scorpio.

So what role does Pluto play in our Chart? Pluto, being so far away from the Sun, takes the longest to orbit. It takes around 249 years to for Pluto to move through all 12 Signs, spending anywhere from 12 to 31 years in each Sign and in each area of your Chart, due to his eccentric orbit. Pluto is one of what is known as the 'generational' planets, in that anyone born during within the same generation will generally share the same Pluto placement.

Pluto sits there, unnoticed, until other planets come into transit with it or when he is changing Signs. In astrology the further out the planet, the more influence that planet will have, because of the time they spend in each area of your Chart and if there is a transit between two planets, it will be the outer planet that will hold the most influence.

Pluto is said to be the planet of death, chaos, change and revolution. Hades was ruler of the afterlife and it was to Hades that you had to pay homage before you could move into the afterlife. At the time of Pluto's discovery, in the 1930's, it was a turbulent and changing time on the planet. It was almost as though life as we knew it changed forever. The Nazi party was born at the same time that Pluto was discovered, the Great Depression was in progress and things were coming to a crisis point, yet out of the crisis of that time, we have the 20th Century as we know it and all the changes, developments and improvements to our lives, that we wouldn't otherwise have had. So Pluto is a planet that can create chaos, but out of that chaos new life and growth is born, so much so that Pluto's symbol is that of the Phoenix rising from the Ashes.

Thus Pluto can bring endings, bring things to a head, create chaos, but also rebirth. So rather than calling Pluto the planet of death he is the planet of transformation. Pluto energy can represent where things are intense and obsessive. It brings these tendencies to the surface by taking us into situations where these patterns play out, so that we try to force our will or control over the environment we're in. Then, by bringing us into contact with people or situations which are even more overwhelmingly powerful and destructive than our old patterns, we are forced to let go, cut away from and move on. In this way Pluto eliminates and transforms our old patterns. It cuts away the past, making room for the new.

Pluto moved into the Sign of Capricorn in 2008 and won't leave until 2024, so after some very tumultuous times and some very uncertain times as he changed Signs, we don't have any more radical changes expected from Pluto, for a number of years, though he is making his presence felt during his interactions with the other planets, namely Uranus. You will in general be unaware of Pluto in your day to day life unless he is being 'woken' by the movement of other planets or if we're straying so far off course or things have gotten to a point where he has no option but to step in and mount an intervention.