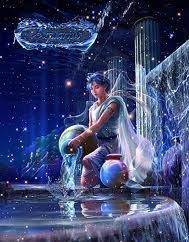 In Uranus we meet the first of the 'generational' planets. These 'outer' planets influence the society and the general parameters we're working under, globally. While we have control over our personal lives, which the personal planets govern, we have no control over the world we live in, not individually and on our own, but collectively we can, which is why the generational planets take our focus away from our own personal lives.

Uranus is the third largest planet in the solar system and the seventh planet out from the Sun. Although there is some indication that the ancients were aware of Uranus' existence, it was not officially discovered or named until March 1781, by William Herschel. Actually 'discover' is too strong a word. The more correct word would be 'confirmed'. Almost a hundred years earlier, in 1690, after mapping and noting Uranus' movements John Flamsteed catalogued it as '34 Tauri'. He even named it the 'Georgium Sidus' (Georgian Planet) after his patron, King George III of England. However it was thought to be a star, not a planet. So although it had been observed, Uranus wasn't recognised as a planet until 1781. Even then it took almost 70 years to give the planet a name. It was Bode, whose infamous 'Bode's Law' later led to the discovery of Pluto, who proposed that even though this was the first planet to be named since ancient times, its name should conform to classical mythology and that it should be in keeping with the rest of the planets. So, in 1850 it was named Uranus, just 4 years after Neptune was discovered.

Uranus was discovered in the 18th Century and was given rulership of Aquarius and the 11th House, both a Sign and an area of the Chart that best represents what Uranus is all about. This was a time of major discoveries, inventions and of technological advancements, the real birth of the modern age. It might not seem so modern from our viewpoint, but for its time and considering the huge strides being made at that time, the leap forward was enormous. In the 18th Century Captain Cook was off exploring New Zealand and Australia, America was being colonised and the Industrial Revolution brought the feudal system to an end. The discovery of this planet took place at a time when there was radical reform, discovery and a complete overhaul of society, with a global need for independence. Uranus was discovered in 1781, during the American Revolution, which ran from 1775 to 1783 and just before the French Revolution, which ran from 1789 to 1799, so Uranus was very much a planet that symbolised the times.

To this day these are the things that Uranus rules, which is a striving for independence, being on the cutting edge of new discoveries, inventions and new ways of seeing and experiencing things. Uranus rules our own need for authenticity and uniqueness, but also how we are connected with others.

Uranus has a cycle of around 84 years and spends around 7 years in each Sign and in each area of our Chart. Uranus often brings sudden and unexpected change, often occurring so unexpectedly that it can be game changing, but in reality Uranus is just the tipping point. Uranus is also a planet that requires freedom of expression and when Uranus energy is triggered, it often encourages us to throw off the past and become liberated, mounting our own War of Independence or Revolution.