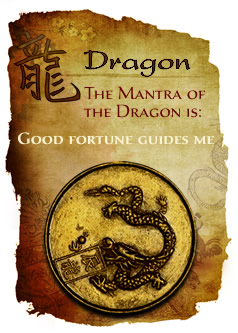 When the Tiger was recognised as the king of the beasts the Dragon wasn’t pleased and a fight broke out between them, as to who was the leader of the animals. But this was an evenly matched fight and neither could get an advantage over the other, so in the end they had to go to the Jade Emperor, asking him to judge between them.

The Dragon, complete with borrowed horn stood in front of the Emperor alongside the Tiger, in order to judge who looked the most ferocious and awe inspiring. The wise Emperor reached a diplomatic compromise, making the Dragon the King of the Water and the Tiger the King of the Land.

By that point the Dragon had grown to like his horn and wouldn’t give it back, especially now that he had the status of King of the Waters. It is said that when the Rooster wakes up and crows in the morning that he’s calling for the Dragon to give back his horn.

Here we meet the most colourful, dramatic and the most flamboyant of all the signs, generous, charismatic and guaranteed never to fade into the background or to become a wall flower. There is never a dull moment with a colourful Dragon around. Dragons have strong opinions, know what needs to be done, how it needs to be done and usually they believe that they’re the best person to get it done and usually they’re right. This can come across as being bossy or even arrogant, working and doing things at a pace that others would find it hard to keep up with and are therefore left feeling inadequate. Yet if that’s the impression a Dragon gives it’s not the intended impression, for they can see what needs to be done, have great organisational skills, are born leaders and therefore jumping in and making things happen is second nature to them.

Dragons often lack tack, saying what’s on their mind in a way that can appear to be judgemental, but is more that they believe they have the right advice and there is no time to lose in passing that information on. Yet a Dragon doesn’t just offer advice and pass judgement, they’ll be the first to put their money where their mouth is and not only tell a friend in need or colleague what they should or shouldn’t do, but will jump down into the trenches with them. While others might not be nearly as judgmental or forthright in their advice, they would stand back and not get involved, whereas the Dragon will be there boots and all.

It can be frustrating living or working with the Dragon, for they have the skills and the stamina that mere mortals don’t possess and can be genuinely surprised or incredulous that others can’t keep up the same pace. The Dragon year is considered especially auspicious, for it is said that heaven and earth are evenly balanced in a Dragon year and that success will follow.

Dragons speak their minds, they are brave and fearless and at times they are larger than life and a little overbearing, but they have hearts of gold and get things done. Dragons are born under a lucky star, but their approach to life ensures they also deserve the success they achieve.