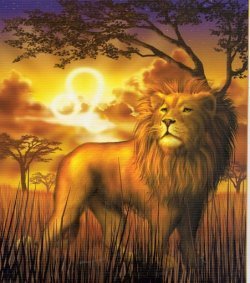 There is something mythical and majestic about a Leo that brings us face to face with someone who is larger than life. Leos are creative, spontaneous and like the Sun, their ruling body, they lighten up our lives. A happy lion spreads sunshine and joy, but a sad lion puts a wet blanket over all of us. Lions simply aren’t supposed to walk around with their tails drooping.

Leo the Lion has always been connected with the Sun. The story goes that the lion behind Leo lived on the Moon and that one day he descended on a shooting star. The Romans even thought that the lion had conquered death itself and the Chinese thought that he took on human form and fought side by side when they went into battle. In Buddhism, the lion is the defender of the law and Hindu beliefs say that he is the destroyer of demons.

Leos are generous by their nature, for Leo energy comes from an Astrological time of the year when the earth itself is rich, abundant and full of colour. Leos love bright colours because it represents their energy and their nature. They are bright, sunny and colourful, which is what makes them so creative. It’s also why they love music, dance and art.

Leos are very social beasts and like their animal counterpart prefer to live and operate in groups, having their own 'pride' around them. Leos can be possessive and jealous and find it hard to handle any potential threat or anyone else trying to muscle in on their territory. Leos are territorial and will defend their mate against all potential threats. There is nothing about this and it shouldn’t be seen as a negative trait, it is simply in their nature, with a strong need to protect.

In the wild a male lion spends almost all of his time preening himself and defending his pride, not against attack or danger, but from other male lions trying to come in and take his place. Likewise, in the animal kingdom it’s the female lions that are the hunters. It’s from these male and female energies that all Leos, male and female, get their possessive nature and their hunting instinct.

Wrapped up in a charming, charismatic and dazzling nature, Leos are usually successful in whatever they try and doors just seem to open for them. They fall down when this isn’t kept in balance or when they let one aspect dominate the other, so they need to learn to control their possessiveness and keep their light shining. The two dangers for any Leos to avoid are letting their light dim or becoming too jealous or possessive. A Leo needs to focus on their own happiness first, because if they’re shining brightly, then everything and everyone in their world will as well.

Leos are very conscious of their appearance and it’s rare to find a Leo who hasn't gone the extra mile to look good. A lot of the Leo qualities and traits are geared around love, for in the animal kingdom, lions are so infertile and their young so vulnerable, that mating is their No. 1 occupation. For Leos it’s dating that is important and looks are a major part of that.

Leo is the proudest, most creative and playful of all the Signs, but behind all that colourful Fire energy we find someone that simply wants to be loved and to find love. More than any other Sign a Leo needs to be able to express themselves, especially creatively and to be loved. It is a very rare Leo that operates well single and even if they’re not in a relationship, they’ll need people around them, for you can’t have a Sun at the centre of it all without anything or anyone to orbit around it!