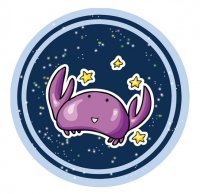 You’ve got yourself one very special Cosmic Angel here and one that is very easy to misunderstand.

Ruled by the Moon, these Moon Babies are soft, sensitive and oh so affectionate. They will grow up to be imaginative, kind and gentle souls. That’s where the misunderstanding comes in, for up to this point, you see this soft little cherub of an angel and all you want to do is protect it.

Yet behind that soft exterior you’ve got one very resilient, tenacious and a very independent soul who doesn’t need and doesn’t want to be protected. Expect some of your Moon Baby’s first words to be ‘I can do it myself’. Your Moon Baby doesn’t need anyone’s sympathy, though they may learn to use other people’s misconceptions to get their way, when they’re older. That ‘butter won’t melt in their mouth’ look? Protect yourself from it now, because they’ll use it throughout their childhood to get away with all sorts of things.

They’re smart, creative and imaginative. In fact they’ll spend a lot of time in the realms of imagination, with daydreaming being one of their favourite pastimes. They’ll cry over a sick bird, even if it’s on TV, show you endless affection and they’ll love storytime, but all the while, those little minds are going. Cancereans often achieve a lot in their lives and are successful, because they are so determined, yet so imaginative.

It’s not going to take you long to realise that you have a very stubborn little Moon Baby here, able to dig their toes in and outlast and outsmart you. They’ll get their way, even if they have to wait it out until you give in. They might not throw a tantrum or appear to be as outwardly naughty as their cosmic mates can be, but they’ll do it in a way that allows them to slip in under the radar, getting under your defences.

Despite their powder puff exteriors, these are tough cookies and they may love to avoid confrontation, so you won’t have as many fights on your hand, but they’ll win in the end, because they’ll outwit and outsmart you and most probably their siblings. Accept their sensitivity and their dream like quality, but never, ever write them off as meek or weak. Never get your Cancerean to ‘toughen up’, thinking you’ve got to prepare them for the big bad world. They’re born ready.

It’s only when attacked or threatened that you’ll see the fight come out in your Moon Baby and then watch out, because they’ll strike. They only protect, so if there’s a brawl in your house and your Moon Baby’s siblings or playmates come off worse for wear, it might pay to look at what they did to provoke the situation. As a Water Sign you’ve got an emotional child here, especially as Cancer is ruled by the Moon. Just as the Moon affects the tides, so too will it affect your water ruled Moon Baby. 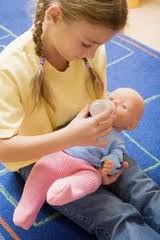 This is a very maternal Sign, so whether your Moon Baby is a boy or girl, they’ll love looking after their dolls, who they’ll think of as their babies, making sure they're never cold or hungry. They are little Mothers and Fathers in the making. They will also love their food, but they are also likely to be fussy about what they do and don't like. As a Cardinal Sign Cancer is a Sign of initiation and of new beginnings, so they might start a lot of things that they don’t finish, but that’s okay. Don’t worry if they don’t stick to things, for they love to ‘try before you buy’. When they find something they love, just try and pry them away! Cancereans are naturally optimistic, but they can also be moody. In fact, Cancer is a Sign of great contrasts, for it gets its moods from the cycles of the Moon.

Your Moon Baby will love the night sky, so as soon as possible, wrap them up warm and take them outside at night and show them the stars and the Moon, especially a Full Moon. Your Moon Baby might be a little crankier around a Full Moon.