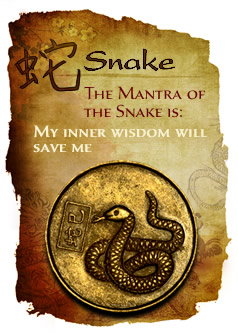 In ancient times the Snake and the frog were good friends, however back then the snake was the one with four legs and the frog had none and it was the frog crawling on its belly. Even so the snake relied on the frog to catch his food, too lazy to catch insects himself. Because the frog got rid of all the pests, everyone loved the frog and distrusted the snake.

The Snake didn’t like this so he began biting humans and their animals and it became such a problem that the snake was called in front of the Jade Emperor who asked him to stop. The Snake completely ignored the Emperor, which angered him even more and eventually the snake was punished by having his legs taken off him and given to the frog instead.

At that point the Snake became remorseful and ashamed of his behaviour vowed to make up for what he had done by putting all his effort into helping people, hoping to redeem himself. This was around the time that the Dragon was made King of the Water and in charge of rain, which he was having trouble controlling. The Snake helped the Dragon control the rains and even after he died he allowed his skin to be used as medicine, to help the sick. The Emperor was so impressed by the Snake’s remorse and penance that he invited him to take part in the race to determine the 12 Animals that would rule the 12 lunar years. The Snake came in just behind his friend the Dragon.

Snakes are deep thinkers, wise, philosophical and great communicators, speaking when they have something to say, but they are the archetypical silent type, keeping things close to their chest.  Yet behind the quiet, calm exterior the mental cogs are constantly turning, always thinking up the next scheme, thrashing out ideas or concepts and always hungry for rich and meaningful debates and discussions. If you have trouble getting the Snakes you know to even open up and talk, it’s likely to be the topic, for they aren’t into small talk or idle conversation. When the conversation turns to banal matters it’s only a matter of time before their eyes glaze over and you’ve lost them. Yet, get a Snake talking about their favourite subject or something that they find mentally stimulating and good luck getting them to stop talking.

Snakes are shrewd and while they have a reputation for being aloof, to the point of being secretive and you’ll never fully understand a Snake, it’s more that they’ll share when they’re ready to, after they’ve thought things through. While Snakes aren’t very good at taking advice from others, they are wonderful advisors and if there is something that a Snake is wise or knowledgeable on, then they’ll be your go to person and they’ll give their time and advice generously. A Snake will often become an expert in the field they’re interested in.

If there is one thing Snakes know how to do it is relax, unwind and have fun. Snakes have a particular fondness for life’s luxuries and hobbies that interest them, which make a welcome escape from life’s realities and responsibilities.

Even if a Snake isn’t successful, which is unlikely, they give off the impression that they are, because of the calm, wise and authoritative demeanour or aura they emit. They ooze wisdom and others assume that they must know what they’re talking about. Snakes are real charmers and often have a sex appeal about them that makes them attractive to the opposite sex and a sense of sensuality that creates some animal magnetism.

Don’t play poker with a Snake though, because they have the ultimate poker face, making it hard to know what they’re thinking behind that cool, calm exterior. Snakes like the things that money can buy and to have money they have to earn money, which often accounts for their success.