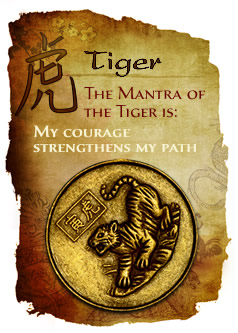 The Tiger wasn’t always the fierce, wild animal that we know today and he only became the fearsome animal he is today through his own hard work and because of the help of his friend, the cat. It was the cat that taught the Tiger the art of stealth and pouncing, but once he had mastered those skills the Jade Emperor made him a guard at the gates of the Heavenly Palace.

With the Tiger in heaven the other wild animals then began to hunt and eat humans and eventually the people had to plead with the Emperor to send the Tiger back, so that he could protect them. The Tiger returned and it wasn’t long before he had the wild animals, such as the lions and bears in control and better behaved. It wasn’t long after that, that humans experienced more problems, when the great Turtle of the Seas began to stir up floods, so the Tiger was sent in to battle the Turtle, which he eventually defeated. As a reward for the Tiger’s bravery the Emperor marked his coat with a stroke for each animal he had defeated and protected the people from.

In gratitude the Tiger was nominated by both the people and the Emperor to take part in the great race to determine the 12 Animals chosen to rule the 12 Signs, taking the position that until then had been held by the Lion.

Life needs to be exciting for the Tiger and the more unusual and innovative the better. The Tiger is drawn to unusual situations or places, anything that is new and interesting, always ready to discover new experiences. A Tiger won’t be happy to hear anyone else’s experiences, they’ll want to try things out for themselves. The Tiger is not only willing and eager for fresh experiences they like to share their experiences with friends, cajoling followers with ‘come on, it will be fun’ or ‘let’s try something new’.  Where others tread carefully a Tiger will rush or pounce in, but rarely alone, for this is a social beast, with friends and friendships extremely important. They also like to get involved and you will often see a Tiger involved in their community, taking action where others will stand back. A Tiger doesn’t say that someone should do something about a situation, they will go into battle for a friend or the underdog and will get in and get the ball rolling, encouraging others to get involved. Often it’s at this point that the Tiger flits off to find another cause, leaving others to finish what he started.

Because friendship and camaraderie are so important to the Tiger they often have to learn some tough lessons and may have been hurt by so called friends along the way, usually because they are so open and take everyone at face value. Where others may wait for someone to prove that they are trustful and worthy of friendship, the Tiger will assume everyone is trustworthy, waiting until this is proved wrong.

Tigers are considered lucky and to have a Tiger in your home is considered auspicious, so this is a person everyone wants to have around and to have in their corner. Yet lucky or not this is a generous, friendly, loyal, brave, fearless and courageous soul, who everyone would gravitate to anyway. They’re great cheer leaders and are great at motivating others. Don’t expect a Tiger to sit still for long and with plenty of variety boredom is their greatest enemy.