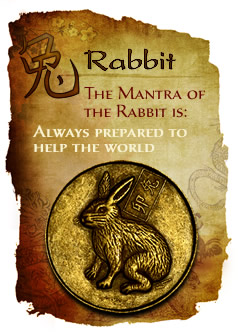 The myth behind the Rabbit is a very familiar tale and in the West this is recognised as the Hare and the Tortoise. The story goes that in ancient times the Ox and the Rabbit were friends, until they were both invited to take part in the race to the Heavenly Palace, that would determine which of the 12 Signs would rule the 12 lunar years.

The Rabbit was a champion runner so he knew he had this one in the bag and that the Ox wouldn’t have a chance against him. However, he didn’t appreciate the Ox’s sense of duty and determination or his punctuality, so while the Ox built up his endurance the Rabbit assumed the race had been won, by him, before it had even begun.

When the day of the race came the Ox and Rabbit agreed to run together, but the Rabbit broke his promise and ran out ahead. So confident was he that he could beat all of the other animals the Rabbit stopped for a nap – and we all know how that story ends.

By the time Rabbit woke up Ox had already crossed the finishing line and the Tiger was just overtaking him. Rabbit panicked and sprinted as fast as he could but it was too late. By the time Rabbit go there the Rat, Ox and Tiger were already there. Maybe it was because he broke a promise to the Ox or because he fell victim to pride that the Rabbit now prefers to fly under the radar.

The Rabbit is a gentle soul and tranquil by nature they prefer life, their home and their lifestyle to be tranquil as well, shying away from aggressive and competitive situations or people, happy not to ruffle feathers or to make waves. Behind the quiet, calm and gentle demeanour of the Rabbit you will find on the inside what you see on the outside, a beautiful soul and often a wise, old soul. Rabbits are super intuitive, dreamy and spiritual, at times seeming to belong to some other, unworldly realm where they seem to have direct communication with. Rabbits are sensitive and treat others how they wish to be treated, which is often with an old fashioned sense of politeness.

A Rabbit really is as even tempered as they appear and while they are passive, it’s not a sign of weakness. A Rabbit simply doesn’t like chaos or drama and seeks serenity in their surroundings and their environment, shying away from drama queens or turbulent situations.

A Rabbit has a sixth sense when it comes to reading others and while they can appear to be aloof or detached, chances are they’re summing you up, with a sense that they can see right through you, which they probably can. A Rabbit will see right through any subterfuge and showiness, more interested in seeing the real person. Always the diplomat a Rabbit will always know the right thing to say, how to put someone at ease and is the most ethical of all the signs.

A Rabbit can sometimes appear to be a bit of a loner, but it’s just that they love to retreat into their tranquil space, away from the rat race. A Rabbit also has a love of beauty and a real sense of style. They are often creative or artistic, with an eye for beauty, either in their dress and how they present themselves and/or in the way they decorate their home. These guys are classy!