The outline in the sky of the Constellation of Gemini is that of an almost perfect rectangle, with each vertical side representing one of the Twins associated with Gemini. For Gemini is the Sign of The Twins, Alpha Gemini (Castor) on the northern/west side and Beta Gemini (Pollux) on the southern/east side.

In Gemini we don’t meet an animal form, as we did in Aries and Taurus, where we met the Ram and Bull. Here we meet the Twins of Greek mythology, Castor and Pollux. The fact that this Sign is the only Sign that has a ‘human’ symbol reflects the fact that this is an intellectual Sign.

Castor and Pollux’s mother Leda, was raped and impregnated by Zeus on her wedding night. During this pregnancy Leda carried in her womb two sacks, containing a total of four children. One sack carried the divine children fathered by Zeus, the other sack carried her two human children, fathered by her husband. From the immortal sack Pollux and his sister Helen (of Troy fame) were born, while from the human sack Castor and his sister Clytemnestra were born.

Castor and Pollux, one mortal and one divine, became inseparable and were known collectively as ‘the Dioscuri’ and are the twins that are referred to, when we talk about the Twins of Gemini. Castor and Pollux were great fighters and warriors and it was Castor who was said to have taught Hercules how to fight. They travelled with Jason as part of the Argonauts and were said to be the protectors of the ‘Argos’. Since that time The Twins have been the patrons or guardians of all seafarers. Twin stars were often depicted on the flags of ancient ships and roman coins that date back to 269 BC depict this image. It is this aspect of The Twins that carries on to this day, for Gemini is the Sign that rules day to day or mundane travel, as it getting from one place to another. 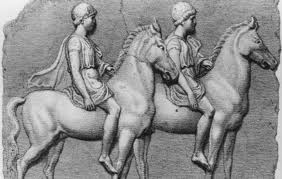 One of the Twins' favourite pastimes was raiding cattle, riding horses (they are the patron of horses) and abducting young women. On one of their cattle raids Castor, the mortal brother was killed. Pollux was grief stricken and distraught and he couldn’t and wouldn't live without his beloved brother. He begged Zeus to let him die as well, so he could join his brother in the underworld. Even if Zeus had allowed this it wasn't possible, for Pollux was divine and therefore immortal. As a compromise Zeus allowed Pollux to gift Castor half of his immortality. That way The Twins continued to live half their life in the underworld and half among the Gods. This is reflected in the Constellation of Gemini, for each day when the star Castor sets in the west, Pollux follows immediately after and vice versa. When Castor rises in the east, Pollux follows after by his side. To the ancients The Twins, Castor and Pollux, didn’t rule the Constellation of Gemini, the stars they saw were The Twins.

Thus Gemini represents the duality of the human spirit, it's darkness and its light, as well as it's positivity and it's negativity. In Chinese Astrology it is said that when Mars invades (or moves through) this constellation, war would ensue. In the East Gemini was known to the Chinese as ‘yin and yang’, which represents balance and harmony and I can see how Mars could stir things up, for not only would he make it hard to keep things in balance, he would inspire Castor and Pollux's love of war, with a reunion of the Argonauts.

No matter what the myth or what the culture, Gemini represents twin, mirror, dual or opposing thoughts or concepts. In many mythologies, they represent dark and light. Ancient astrologers assigned to this constellation guardianship of the hands, as well as intense devotion, brotherly love, genius and largeness of mind. Thus Gemini has been a Sign that represents duality, especially of thought or thinking. It is also an energy that can be volatile, curious, quicksilver, talkative and just like The Twins, easily bored and restless. The duller, more mundane aspects of life aren’t for Geminis.

Mercury, Gemini's ruling planet has a cycle of 88 days and can spend less than 3 weeks in each Sign. However Mercury retrogrades three times each year, spending up to 2 months in the Signs that he retrogrades in. It is these Mercury retrograde periods that often create misunderstandings, mistakes and accidents, creating periods that are often referred to as 'Mercury Madness'. As the planet closest to the Sun, Mercury has the shortest orbit of and is the fastest of all the planets. Mercury has always been visible to the naked eye and has been known and recorded since at least the time of the Sumerians (3,000 BC). In Ancient Greece Mercury was given two names, as like Venus it rises in both the morning and the evening. In the morning, it was known as Apollo and in the evening as Hermes.

The ancients knew that they were the same planet, just as they did with Venus and just like Venus, Mercury rules two Signs, Gemini and Virgo. In ancient times Heraclitus even believed that Mercury and Venus orbited the Sun, not the Earth. This was true Gemini thinking and intellect, for this was thousands of years before we knew that the world was round, not flat.

Mercury is an erratic and eccentric planet, with an orbit that would produce very strange effects if you were able to stand on its surface. At some longitudes the Sun would appear to rise, stop, reverse up and stop again before resuming its original path towards the horizon, decreasing in size as it went. At the same time the stars would appear to be moving three times as fast across the sky. If you were standing at other points of the surface of Mercury, you would witness different, but equally bizarre and erratic motions.

As Mercury travels very close to the Sun, it’s often hard to see because of the Sun's glare, although it can be seen with the naked eye, especially in the evening and early morning, low on the horizon. 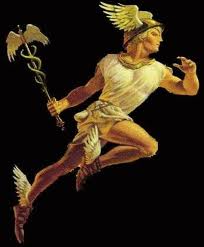 The god that rules Mercury is Hermes, 'Messenger of the Gods'. To the ancients though, this wasn’t how they saw it. They saw not a planet, but Hermes himself and with a planet so erratic, no wonder Hermes was such a fickle and unpredictable god.Mercurial would be the word that would best describe this god, for it was impossible to pin him down.
Hermes is the god that most resembles the Twins. Born from ‘mother night’ and Zeus, king of the Gods, he is the child of spiritual light and primordial dark. In fact, one of his tasks was to guide souls on their journey to the underworld. His mother Maia was a mysterious nymph who gifted her son with the arts of magic and divination and in the Tarot, Hermes is often depicted on the Magician card. Zeus gave his son the job of Messenger of the Gods, charged with delivering messages from one god to another and from the gods to mortals. But you could never trust whether or not the messages Hermes delivered were right or not, for he loved to play practical jokes and was known as the ‘trickster’.

Mercury is also the patron of thieves and liars and was known for his practical tricks, so he wasn’t a god you could trust completely. When he was just a baby Hermes left his crib and stole the cattle from his brother Apollo, the Sun God. In order to trick Apollo he wore his sandals backwards so that Apollo would look in the wrong direction for the culprit.

When Apollo finally confronted him Hermes gave Apollo a gift of a tortoise shell lyre and flattered him to such an extent over his singing, that his brother forgot all about the stolen cattle. Thus, Hermes rules the gift of communication and in perfect dual fashion, both communication you can trust and that which you can’t, for he personifies charm, flattery and smooth talking. Hermes was the original snake oil salesman. In the ancient world there would often be statues of Hermes at crossroads, for he was the patron of travellers, wanderers and the homeless. 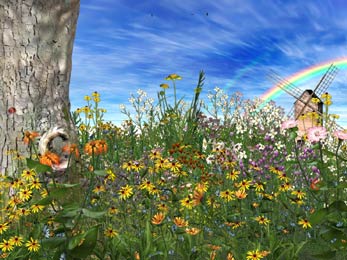 Gemini is the third Sign of the Astrological year and of the Zodiac and is the last of the three Spring Signs. Gemini is an Air Sign and rules the mind, all things intellectual, siblings and communication.

By the time the Sun reached Gemini each year the hard work of sowing had been done and spring was coming to an end, about to transform into summer. The days were now longer than the nights, with the Sun getting higher in the sky and the evenings getting longer. This was a time of year when people sat outdoors in the evening, discussing ideas and plans. The summer solstice was getting closer and there was a lightness in the air. People were out and about, walking, appreciating the flowers and the new life emerging. Nature itself was putting on a spectacular display, something Gemini’s like to do.

Being the last Sign of the spring triad Gemini is a mutable Sign. That is, it’s a Sign of transition, which means that Geminis are adaptable. Spring is about to end, but not yet and summer is about to begin, but not yet. This is a time of discussion and ideas. There is lightness and the promise of change in the air and everything is buzzing with expectation for the coming season.

In Gemini we find the duality that comes from the Constellation of Gemini. The concept of ‘twinship’ covers all aspects of life, thus Geminis are often said to be able to accomplish many tasks at once, born multi taskers. In fact Geminis need the mental stimulation of many things going on at all times, forever looking for stimulation just as Castor and Pollux did. It is from both the Constellation and from Hermes, patron of travellers, that Gemini is given rulership of short distance and mundane travel. It is from Hermes that the gift of communication comes.

Great thinkers and writers often have either their Sun in Gemini or have Mercury itself in either Gemini or their 3rd House, the house ruled by Gemini. Spring is a time of new beginnings and new ideas, but being a mutable Sign it's a Sign of transition or ending of one cycle and beginning of a new one. It is a Sign that is not about starting new things like Aries, or putting in the hard work like Taurus, it is the Sign that says ‘How can we do this better’, 'what next' or 'what else'? This is also where a season is wrapped up, so Gemini energy is about bringing things together. It’s a Sign that discusses how the planting went and plans for the coming harvest. It is a Sign that looks both back over the season ending and forward to the one about to begin. As an Air Sign, Gemini is a Sign that is all about ideas and the intellectual mind.