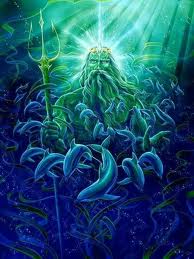 Neptune is the second of the generational planets. Where Uranus rules the way society is operating at any given time and the way we see and respond to that, Neptune represents the 'mood' of a generation. As an example, Neptune was in Libra, the Sign of peace, love and harmony between 1942 and 1956. This was the generation that produced the 'flower power' children - the Beatles, Woodstock - everything the 60's epitomised comes from a generation of children that were born with Neptune in Libra when they were born, who began to come of age in the 60's, the generation that we now refer to as the 'baby boomers'. Children born with Neptune in Libra were part of the post war baby boom, but this was also a time that saw peace come at the end of Second World War. The mood of the collective psyche, especially in the younger generation and the 'mood' of the times was that of Peace. Children born between 1942 and 1956 were born with Neptune in Libra and they were born from parents who were still living in or were within a decade on from a World War, so they wanted nothing more for their children and for themselves, than peace.

In that time the 'mood' of the people was Peace, just as now we have a different 'Mood', as will each generation, defined by where Neptune was in their Birth Chart and where Neptune is at the time. Yet when the baby boomers started to come of age in the 1960's it wasn't a time of Peace, yet they were born with that belief that peace was attainable and that is what they fought for. This was the time of the Peace Movement, of the Civil Right Movement, assassinations and the Vietnam War demonstrations. Libra is a Sign of equality, so here was a generation fighting for Peace and Equality, which the rest of the world is reaping the rewards of now and still trying to fight for, but with nowhere near the fervour that the baby boomers did in the 1960's and early 1970's. Those born with Neptune in Libra were fighting against it something, refusing to accept what they were born to believe in. Each generation has it's own Neptune sense of zeal. Children born between 1998 and early 2012 are the 'tech' generation, whereas Neptune's return to Pisces in February 2012 begins a new generation, with those children born between now and 2026 part of a more spiritual generation.

Neptune has a cycle of 165 years, which means it spends around 14 years in each Sign. Neptune returned to in Aquarius in 1998 and until it left and returned to Pisces, for a few months in 2011 and here to stay since February 2012, the 'Mood' of the collective psyche was on connecting, discovery and on creating a global village, as well as taking care of the planet. Aquarius energy is very akin to Uranus energy, which is about being on the cutting edge of discoveries, independence, yet being globally connected. The world was shrinking when Uranus was discovered, with the far flung corners of the world being colonised, then with Uranus in Aquarius the world became connected again, through the realms of technology, the Internet and the birth and boom of social media. What will go down in history as Neptune in Aquarius' legacy or generation is the explosion of the Internet and the need for people to be plugged in, connected and in constant contact with each other. Look back to 1998 and how many people had access to the web or had a cell phone compared to now. Now that Neptune is back in Pisces, the area of the Chart it rules and is staying in until 2026, the seeds are being sown for a more spiritual era.

While Neptune was discovered in September 1846, he was almost discovered by Galileo in 1613, over 200 years earlier, except for the fact that it was a cloudy night at the time. Neptune is the planet of mystery, so it's apt that it would hide behind cloud cover. Galileo was studying the sky and thought he noticed something that might be a planet - it was, it was Neptune, but when we went back the following night to try and find it - it was cloudy. Two days later Neptune moved into a part of the sky where it was unobservable - and there he hid, undiscovered for another 200 years. But in my view, each of the generational planets were discovered when we were ready to discover them, for they each represent their time of discovery. We weren't ready for Neptune in the 18th Century, for the focus was on technology, discovery and independence, which aren't the realms of Neptune at all. The 18th Century simply wasn't the right time for Neptune to reveal himself and he knew it.

So what kind of world did discover Neptune? Neptune was discovered in the same year that chloroform and ether were discovered, drugs that could put a patient to sleep, for the first time allowing for safe and painless surgery. It was a time when people were seeking more than material satisfaction, they were looking for something deeper, but they were also turning away from traditional religions and for the first time the general public were forming things like the Theosophical Society and were discovering their own spirituality. Mediums and psychics were all the rage at that time. Up until that time the State regulated religion. People were told what to believe and how to practice that belief. Neptune came along and challenged that. Neptune came along at a time when people were discovering their own beliefs, their spirituality and idealism.

Neptune is said to dissolve the old patterns and boundaries and urges people to tune into subtler realms, higher ideals, to unconditional love, spirituality and music. Neptune also encourages an escape from restriction and reality. On the negative side Neptune energy can mean an escape from reality in the form of drugs and alcohol and other addictions.

Neptune was discovered in a time when human rights were first being recognised, something alien to previous generations and times. Even though Neptune was discovered before Slavery was abolished, 20 years before the American Civil War, already people were aware that as human beings we had rights, whether it was a Slave in America, a woman in who couldn't vote or child labour. Neptune was discovered at a time when both the Abolitionist and the Suffragette Movements were being born, for human beings were moving to a much higher level of awareness and the greatest awareness of all, was the value of human life and the rights that all humans had.